Chapter 18. I need a disciple

How long had it been since he last saw the pope laugh so joyfully like this? Wasn’t this a laugh of pure joy, and not the light-hearted laugh that the pope usually used?

“The boy’s body isn’t even developed, but he dared to get the Godly Eyes? This boy’s really weird.”

“Your holiness, what do you mean?”

“This boy really messed up the order of doing this.”

Contrary to what he was saying, Gongson Chun Gi had an amazed expression. The fact that the boy’s Godly Eyes were open meant that he was seeing things that differed from what others were seeing.

Seeing a different world. Just that already meant that the boy had taken a step into the world of superhumans. If you were looking at this from a martial artist’s point of view, the boy already entered the harmonious stage.

‘Well, this is a bit different from martial arts……’

After thinking about something for a while, Gongson Chun Gi stretched out his hand and started to search the boy. His eyes soon sparkled.

Gongson Chun Gi said this, as if he found something, then turned to the confused Guardian Wu, and spoke.

“Guardian Wu, come out with me for a bit.”

Guardian Wu and Gongson Chun Gi left Cho Ryu Hyang on the ground, and came outside. After coming out, none of them spoke for a while.

How much time had passed?
When Guardian Wu started to feel a bit impatient, Gongson Chun Gi spoke up.

“I think I might be able to grant you your lifelong wish. You can be happy.”

Guardian Wu tilted his head in confusion. What was his lifelong wish again? When Guardian Wu kept trying to figure it out with a confused expression, Gongson Chun Gi answered him with impatience.

“Wasn’t your lifelong wish for me to get a disciple? I think I found someone I like today.”

Who was Gongson Chun Gi? He was a person that never took on a disciple just because it would’ve been annoying.

The Heavenly Demon Church’s only worry was right here. It could easily be said that the pope’s martial art was the strongest under the heavens right now.

The problem was, this martial art wasn’t able to be passed down.
No matter how much the elders and the guardians begged, the pope refused to take on a disciple.

But to think that the problem would be solved like this. Guardian Wu quickly came back to his senses.

He felt that this was the crucial moment. The heavens had granted him a chance to save the church’s future. He spoke to the pope with a face full of determination.

“I’ll take care of it, your holiness.”

“Wouldn’t the old man that calls himself the boy’s master be a hindrance? If you just tell me to do so, I’ll take care of him without a trace.”

When Guardian Wu said this, Gongson Chun Gi wrinkled his face. He clicked his tongue in displeasure.

“This is why the church gets insulted by everyone. Why wouldn’t we get insulted when we just go around killing people for one little thing? And don’t get too greedy yet. The boy didn’t agree to this yet.”

“Hehe, you’d have to be insane to refuse to become the heir of the church.”

The Heavenly Demon Church lead a force of 10,000 men. Fame and riches. You could acquire both by becoming the heir.

“Well, we don’t know for sure. Anyways, I actually called you up here was to tell you to not do anything foolish or say something useless,”

“Haha, I’m not even an immature child, there’s no way I’d do something like that.”

“Well, if it’s you, it’s certainly possible. An old man with too much energy is always dangerous.”

There were too many things he was worried about from the start. But he still brought his disciple here because he wanted to let the boy see and experience the world a bit.

But it seemed to be a foolish decision. The boy seemed too frail and weak for all this. Since Jo Gi Chun felt like he gave the boy an unusually heavy load, he felt very sorry.

While he was thinking about many things, Gongson Chun Gi and Guardian Wu entered the door. Jo Gi Chun determined that the middle-aged man was actually the pope, and the old man was the Guardian. His judgement was correct.

“Is this boy your disciple?”

After pausing a bit, Gongson Chun Gi spoke with an awkward smile.

What was his intention?
When Jo Gi Chun observed the man in front of him a bit, Guardian Wu came up. And asked a question.

“What do you think about the church?”

“You mean the Heavenly Demon Church?”

Jo Gi Chun felt that something was a bit off at that moment. This was from the instinct he developed after living for a long time. That was why he chose his next words carefully.

“I think it’s quite different from the rumors that circulate the world.”

Guardian Wu’s face lit up in pleasure.
This was the same for Gongson Chun Gi.

“The rumors about the church isn’t all true. Many of them are exaggerated. To think you would recognize it, I thank you.”

“It’s just what I felt after observing the church. No need to feel thankful.”

“Well, I’m still thankful for your words. Anyways, I’ll get right to the main point now.”

Jo Gi Chun nodded. He, too, wanted to get straight to the point, instead of talking mindlessly for a long time. Gongson Chun Gi sat on the throne on one edge of the temple, and spoke.

“To be honest, I have an interest in your disciple. To be even more honest, I think the boy has potential to become my heir. So I’m going to make a rude request here.”

This was it.
The thing he was feeling from a while back.

Jo Gi Chun bitterly smiled in his mind. And he thought.

Cho Ryu Hyang was a talented boy. The boy’s talent for math was but a fraction of the boy’s true capability. Yes, that was it.

Didn’t he think this from a while back? He thought that he would let the boy take a different path if a chance came up. He always put this possibility in his mind, and steeled himself for it.

But when it actually happened, Jo Gi Chun hesitated. To think he would hesitate to make a decision that would ultimately benefit the boy……

Jo Gi Chun felt much regret because the time he spent studying with his young disciple was far too short. It was hard to let go of the feeling of wanting to teach the boy more. Gongson Chun Gi, who was observing Jo Gi Chun’s face, opened his mouth.

Gongson Chun Gi was serious. That was why he said this with honesty. He wanted Cho Ryu Hyang that badly.

If any of the guardians or elders of the church saw this, they’d be extremely surprised. To think that the pope would be think be this passionate about this. They would’ve been amazed.

But there wasn’t a single person so far that had the capability to understand his teachings fully. That’s why he didn’t take on a disciple yet.

Jo Gi Chun, who was staying silent all this while, asked something.

“Are you truly the pope of the Heavenly Demon Church?”

“What can you do for this boy?”

Gongson Chun Gi pondered on this seriously. He was the master of the Heavenly Demon Church, and he was one of the few people that possessed both fame and wealth. Being a master of the church meant that his words carried great responsibility. That’s why he had to be careful with his response.

“Would you be satisfied if I said that I would dedicate every fiber of my being for this boy?” 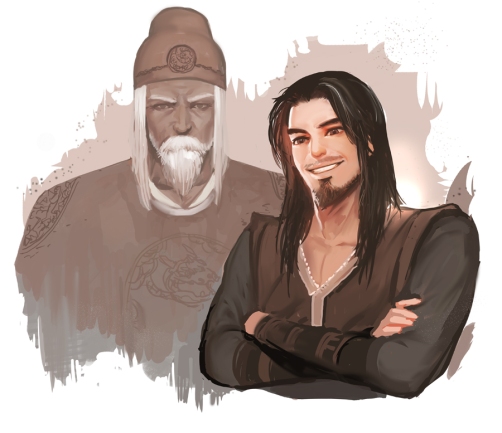 “There was only a few times in my life where I’ve been this anxious. Thanks for agreeing to all this.”

After saying this, Gongson Chun Gi rolled up his sleeves and talked.

“Should we move onto the next step?”

“Is there still more to be done?”

“Shouldn’t we hear what the boy has to say? We got permission from the teacher, but we didn’t hear the boy’s opinion yet.”

“Are you trying to wake him by injecting internal strength? If it’s that, this one will……”

When Guardian Wu stepped forward and tried to put his hand on the boy, Gongson Chun Gi shook his head.

“That method’s too rough. It also leaves some negative effects afterwards, so it’s not good for children. I have a better method. Just watch.”

Gongson Chun Gi put his hand on Cho Ryu Hyang’s forehead. He then smiled a mysterious smile, one that was different from all others before it, and spoke.

When the door opened, he could see two people. A old man in a black robe, and an ordinary middle aged man.

After the old man said a few things, the middle aged man came up and prepared some snacks. Cho Ryu Hyang began to focus on this very moment.

‘Just what did I get surprised by?’

‘What was it? It was really important.’

Even as he was pondering on this, the events in front of his eyes kept progressing.

If it was like before, the events should transition to the part where the middle aged man began introducing himself. But it didn’t continue.

The man who was preparing the snacks stood up, and looked at Cho Ryu Hyang straight in the eyes with a mischevious smile. Cho Ryu Hyang flinched a bit because of how lifelike it was.

“You trying to run again? I can’t let you do that.”

Cho Ryu Hyang tried to throw off the man’s hand frantically. But it was impossible. He didn’t understand. It was definitely his dream, but the man in front of him somehow felt a bit foreign.

When Cho Ryu Hyang was about to resist, the man grinned and spoke.

Cho Ryu Hyang began to turn pale. The feeling that he saw something he wasn’t supposed to see. With this feeling, the fog in his mind lifted, and he could see the truth that lay behind it.

“You should pay for seeing my secrets, boy.”

The man’s forehead began to split in two horizontally. While Cho Ryu Hyang was looking at this with a terrified face, a blood red eye that appeared from the forehead.

The man’s original two eyes, and that blood red eye. A set of three eyes were staring at Cho Ryu Hyang.

Once Cho Ryu Hyang saw this, his whole body trembled. He finally remembered.

The reason Cho Ryu Hyang fainted. It was because of the impossible number on the man’s forehead.

That number left Cho Ryu Hyang speechless, but something even more amazing than that happened after. Something that made Cho Ryu Hyang afraid.

The numbers on the man’s forehead came together, and soon turned into a giant red eye that stared at him. Something like this never happened before.

The numbers turned into an eye and glared at him?
This phenomenon left him breathless.

When the red eye curved upwards as if it was laughing. Cho Ryu Hyang was forcefully pulled away from his dream.