The Head of the Gray Heaven Delivery Company, Cho Mu Ryung, was standing out in his yard with a dumb face. Moments before, he had told that girl, Neng Ha Young, everything that she wanted to know. Now, he was just resting here in a daze.

“Dear, did something happen?”

Cho Mu Ryung looked at his wife with a frown. The wife sensed something ominous from her husband’s face, so she approached her husband and lightly grabbed hold of his hand.

“Is there something troubling you?”

Cho Mu Ryung’s wife, Yu Song Ryung’s face stiffened. Their child was sent to an academy in order to learn more about subjects regarding the family business. Did something happen to the boy?

When Yu Song Ryung made an anxious face, Cho Mu Ryung sighed and opened his mouth.

“Actually, a while ago, old man Jang sent me a message. It was about our boy going on a trip with his teacher……. Apparently Jang couldn’t stop them because they were so adamant about going. I didn’t think much about it at the time, since our boy is a smart child, but to think he would go to the Qilian mountain…….”

Yu Song Ryung’s face paled. She knew about what had happened at the Qilian mountain. The Alliance-Demon War took place, and an unimaginable amount of experts died.

The story of the Alliance’s crushing defeat was still a hot topic. The problem was, their child was there where the war took place.

“What happened to him? Is he safe?”

Cho Mu Ryung couldn’t say anything to his wife, who suddenly gripped his hand much stronger than before. Even he didn’t know much about the situation at hand.

He didn’t trust everything Neng Ha Young said, but because of that uneasy feeling he felt, he was asking anyone he could get his hands on about his son.

“What do you mean that someone’s going to contact us?”

Cho Mu Ryung looked into his wife’s trembling eyes for a bit, then sighed. He then proceeded to tell her about the conversation he had with Neng Ha Young.

Neng Ha Young suspected that their son was involved with the Heavenly Demon Church in some way. As her suspicions did make quite a lot of sense, Cho Mu Ryung was feeling extremely uncomfortable.

If his son was indeed connected with the Heavenly Demon Church, it would cause a lot of problems.

They would occasionally collaborate with a martial sect when delivering valuable goods.

Whenever Cho Ryu Hyang saw that, he would ask a question about the martial world, and Cho Mu Ryung would answer in a way that made the martial world seem like a place that helped the business quite a bit.

–It doesn’t matter if a cat is white or black, as long as it can catch mice.

Cho Mu Ryung had said this to his son. It was a quote he heard from someone else in the past.

After all, it didn’t matter to them where a martial artist was from, as long as he/she could take care of bandits.

He said this to his son so that his son would prioritize strength over status, but now, he was kind of regretting he had said that.

Right now, here in the Sichuan castle, it wasn’t an exaggeration to say that the power of the Alliance was the most prevalent.

When a person was running a company, it was important to make sure that the company wasn’t favoring one side over the other. Especially in the martial world.

And if that company was starting to lean towards the Heavenly Demon Church out of all things, it was important to try to end that relationship before anything bad happens.

“Don’t worry, dear. Since the boy’s smart, I don’t think he’d do anything dangerous.”

Even though the Heavenly Demon Church is strong, there was no guarantee that it would stay strong. A merchant who only looks into the near future can never make it big.

A good merchant had to look at things while considering the future farther away. Because of that, Cho Mu Ryung believed that the Heavenly Demon Church’s power wouldn’t last long.

He believed it to be something like a summer night’s dream, short and fleeting. At least, that’s what he thought until an uninvited guest visited him in the night.

When he woke up due to the chilling cold that ran through his back, he saw that someone had snuck into his room.

He instinctively grabbed the sword by his bed, and stood up.

When Cho Mu Ryung shouted out loudly, the man in the room began to speak politely.

“Because of some special circumstances, I could only visit you at a time like this. Please understand…….”

Cho Mu Ryung could detect that this person in front of him was very calm and collected at the moment, given his tone. Maintaining that kind of an attitude was something that only a person who was confident in his abilities could do.

At that moment, Cho Mu Ryung began to look around urgently. His surroundings were too quiet. The person in the shadows smiled when he saw that, as if he had sensed Cho Mu Ryung’s anxiety.

“I put everyone in the vicinity to sleep, so that we talk without interruptions. No one will come if you shout. Even your wife.”

Just when? Cho Mu Ryung tightly gripped his sword. He suspected this already, but the person in front was indeed someone whose skills he could not fathom. 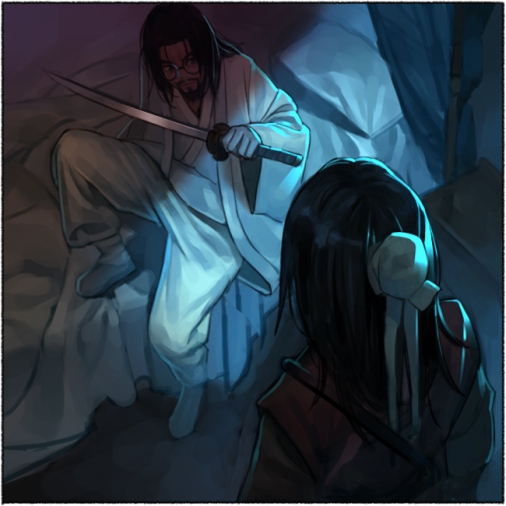 But that didn’t mean he’d go down without a fight. While he had been trying to look for a chance to attack, though, the man in front of him began to politely introduce himself.

“I am sorry for the late introductions. I am from the Heavenly Demon Church, and my name is Um Seung Do.”

Wasn’t the Heavenly Demon Church that infamous church of demons? Why did that come here? Cho Mu Ryung made an anxious face. It was understandable.

After all, just the name of the church was capable of inciting fear. The church had always been the strongest.

Especially now that they defeated the Alliance. But the thing Cho Mu Ryung was afraid of at the moment was a lot of more realistic.

He was afraid because of his conversation with Neng Ha Young during the day. Wasn’t the timing between these two people here too coincidental?

Neng Ha Young definitely said that his child was related to the church somehow.

After an ominous feeling swept through his body, the man opened his mouth slowly.

“I knew Neng Ha Young dropped by in the morning. As expected, she was a smart child.”

When Um Seung Do came into the building and stumbled across Neng Ha Young and Cho Mu Ryung’s conversation, he became extremely conflicted.

He was conflicting over whether he should kill the bastardly girl on the spot, or just let her go.

It didn’t look like anything at first, but if she actually managed to find what the connection was, wouldn’t she reach a huge conclusion?

‘The Heir of the church.’

The Heir must never be exposed to the public. The Heir must be nurtured in a safe haven where he can grow to support the church.

Having the Heir’s identity exposed would create an immense amount of danger for the church itself.

Not only that, the current Heir really was too weak. If some kind of danger appeared, no matter how small, there would be a chance of him dying.

Um Seung Do reached this conclusion, and immediately set out to kill, but at that moment, he couldn’t even lift a finger.

He became pressured by a huge amount of killing intent the moment he thought of moving. A killing intent potent enough to make a peak expert like Um Seung Do freeze on the spot.

There was someone next to Neng Ha Young. Um Seung Do still couldn’t forget the aura that the person next to that girl gave off.

‘That person was definitely a harmonious expert.’

That much energy (無形之氣: formless energy produced by an expert) could only be produced by a harmonious expert. The problem was, Um Seung Do had no idea who this mysterious expert was.

There were only two harmonious experts in the Black Moon Guild. Neng Mu Gi, one of the three sovereigns, and Sang Dong Ha, the Chasing Blood Lord.

But these two people weren’t people to had the time to act as a bodyguard for some young girl. That meant that there was some other harmonious expert protecting her…. that made Um Seung Do very confused.

“Then you heard what we talked about?”

“It wasn’t intentional, but yes.”

Um Seung Do could’ve lied, but he decided not to. Cho Mu Ryung probably wasn’t going to be an enemy, which meant that he didn’t have to lie to the man.

Of course, Cho Mu Ryung might not think that, but that’ll all pass in due time.

“So you heard about the matters regarding my son?”

Things would get important from here. Um Seung Do nodded with a serious face.

“Tell me. Is my child really involved with your people?”

Um Seung Do knew there was no one nearby, but he did a quick check of his surroundings anyways, and opened his mouth.

Cho Mu Ryung’s face went through a variety of changes. His suspicions had just been confirmed.

That was the question that weighed in his mind. Just what were they going to do with his child? While he had been thinking that, Um Seung Do began to talk in a more respectful manner than before.

“The Young Lord became the Heir to the church. The future Pope. I was sent here in order to share the joyous news.”

What? Good news? Cho Mu Ryung stiffened like a statue with his mouth wide open. He still didn’t know what this man in front of him was talking about.

Since Um Seung Do expected such a reaction already, he prepared himself to explain the whole situation more in detail. The man in front of him was worthy of such things.

“To be more specific, the Young Lord Cho Ryu Hyang became the official disciple of the Pope. The Young Lord is currently at the main church in order to train.”

The sword in Cho Mu Ryung’s hand fell down powerlessly. The sword that Cho Mu Ryung never let go of, even when being battered by clubs, just fell down.

Cho Mu Ryung’s face became dazed. Just who was the Pope? Was the Pope not the person who was crucial in leading the recent war to an outstanding victory?

The man who was recognized by all to be the strongest in the world.

‘The Strongest Demon Under The Heavens (天下第一魔).’

That was what Gongson Chun Gi was being called at the moment. To become the disciple of a person like that, this was too outrageous, wasn’t it?

Um Seung Do, who seemed to have expected such a thing already, just smiled and opened his mouth.

“Congratulations, sir. This is a glorious event for the church. Soon enough, the church will provide you with a gigantic reward.”

Normally he was known to be a very calm individual, but what was going on around him right now really wasn’t something he could’ve expected.

He couldn’t figure out where and how to start clearing things up. In the end, Cho Mu Ryung just fell to his knees.