The last editor, Kiyara, has been MIA for 3-4 months? I dunno what happened to him..

Un Hui’s condition was worse than everyone had thought.

He had used too much inner energy whilst he was severely injured.

“What will we do about Gal Mun Hyuk? Are we just going to leave him be?”

Cho Ryu Hyang thought a moment when he received those questions from Sunwu Cho Rin; then, he opened his mouth.

“It would be best to leave him be for now.”

Sunwu Cho Rin made an annoyed face as she opened her mouth.

“Is it because of the experts at the palace?”

At the moment, not even Sunwu Cho Rin knew how many experts the Imperial Palace had.

But she didn’t believe that they would lose in terms of sheer power.

As long as the church sold salt in Sichuan, the church and the Imperial Palace were definitely going to collide at least once.

That’s why she thought that there was a need to crush them as soon as possible.

‘I never liked that idiot anyway.’

If Sunwu Cho Rin were to name one reason why Gal Mun Hyuk should die, it would be because ‘he was annoying’.

The man actually dared to go against the church?

That alone made him deserve to die a thousand times over.

How were they related to all this?

Cho Ryu Hyang wasn’t shaken at all by Un Hui’s injuries, and he was still making logical decisions at this time.

The kid really was someone who knew how to think.

She was beginning to see Cho Ryu Hyang in a new light, but on the other hand, her desire to kill him intensified even more.

‘I definitely can’t let him get together with Ahri.’

As Sunwu Cho Rin was having these thoughts, Cho Ryu Hyang opened his mouth.

Doing just that would be extremely easy for the church.

After giving out orders, Cho Ryu Hyang looked down at Un Hui with a worried face.

Sunwu Cho Rin’s thoughts began to stray as she looked at Cho Ryu Hyang’s face from the side.

There also was a white rabbit that Gongson Ahri began to bring to her bed every night.

Because of the fact that this rabbit, which had the strange name of Maksu, belonged to Cho Ryu Hyang, Sunwu Cho Rin felt annoyed whenever she saw it.

That was why she always bothered the rabbit when she got the chance.

‘Come to think of it, that rabbit was a little bit strange…….’

Just what about it was strange?

Sunwu Cho Rin recalled the time when she threw the rabbit by its feet when Gongson Ahri wasn’t watching.

It almost felt like the rabbit was looking at her in a certain way.

‘I must’ve been imagining things…….’

Was it sorrow and pain?

No, those eyes seemed to reflect a hint of grief.

They were eyes that seemed far too complicated to belong to a simple animal.

After that point, Sunwu Cho Rin decided not to bother the rabbit anymore.

It made her feel uncomfortable.

But watching Gongson Ahri happily talk about the rabbit to Cho Ryu Hyang made her stomach flip.

She immediately forgot about the rabbit’s sorrowful eyes altogether, and threw the thing by its ears in rage.

How could she describe the eyes of the rabbits at that point…….

It greatly resembled those of an old man’s at that time.

‘I must be going crazy.’

Anyway, both the rabbit and its owner were very annoying.

The two resembled each other.

As Sunwu Cho Rin complained to herself, the rabbit teleported away to the place he had been sealed at.

Maksu rubbed his ears and ground his teeth. His ears still hurt.

Whether it was the gold-haired girl or the black-haired one, they were both equally annoying.

‘Are you not afraid of my revenge……’

Maksu swore that he would take revenge as his body trembled in rage, but he knew that doing that would be extremely hard.

Unless that strange kid called Cho Ryu Hyang didn’t die, he couldn’t do anything.

Maksu was about to walk to the place where he had been sealed with depressed emotions, but then something entered his senses.

The two shining eyes in the darkness.

The 王 (wang: king) character that was engraved on the forehead.

It was a tiger that was known to be the Mountain King.

The aura that was being emitted from its giant body was truly overbearing.

But Maksu’s eyes didn’t have a tint of fear in them.

Instead, his face actually held a smirk.

[Leave, cat. Don’t be tempted by my appearance, and instead go find some other guy to eat.]

The tiger ignored Maksu’s warning, and took a step forward.

Maksu’s eyes were filled with rage in that instant.

But he managed to control himself a bit and calmly opened his mouth.

[This is my last warning. I’m busy so leave.]

The tiger completely ignored Maksu and jumped towards the rabbit with its paws wide open.

It was an attack that obliterated countless victims in the past, but this only managed to annoy Maksu even further.

This time, Maksu did not control himself.

No, there was no need so.

He jumped up and performed a spinning kick on the tiger.

It struck the tiger’s chin, and made the tiger fly off into the distance.

When the tiger hit the ground, it made a heavy noise.

But Maksu wasn’t satisfied with just this.

Maksu quickly ran to the tiger, and smashed his paw into the abdomen of the tiger.

The tiger let out a painful shout in this strange and peculiar situation, but Maksu just kept on kicking and punching the thing.

Maksu beat up the tiger to the verge of death, then he crouched in front of the sared tiger and opened his mouth.

[How is it? Can you see who is the stronger one now?]

When the tiger moaned in pain, Maksu spoke.

[I’m going to get shit on if I kill a weakling like you, so I’ll let you go for now. Leave.]

When the tiger left with its trembling body, Maksu shook his head and sighed.

Since when did he start doing shameful deeds like this?

The fact that he actually got himself involved with such a thing made him feel extremely humiliated.

Humiliation bubbled up in his body.

Maksu stood dumbly at his spot for a moment, then shook his head, and opened his mouth.

[I should go get that child.]

Maksu looked around a bit, and became a bit confused.

He couldn’t find anything when he looked around, though.

Did someone take it?

The Godly Herb wasn’t something people could easily get their hands on.

It only begged for its life because Cho Ryu Hyang and Un Hui were that strong. If a normal person were to approach it, its roots would wrap around the person and turn him/her to food.

After looking around for a moment, Maksu realized something.

He stretched out his senses, and scanned the area once more. When he did so, his jaw dropped.

Maksu began to mumble to himself like a buddhist monk uttering prayers.

[Come to think of it, that strange old man with the weird fan did a similar thing. So that kid was imitating that old man’s works.]

As Maksu did not realize that all this was created with mathematics, he simply became even more confused about Cho Ryu Hyang.

[Is the kid the old man’s disciple or something…….]

When he thought of the old man, he became annoyed again.

But he quickly came out of his imagination and began to look around once more.

There had to be the “core” of the formation nearby.

He managed to find it rather quickly.

Normally, one would make a formation with precious gems, or something that was as abnormal as a gem.

But using a rock as a core? That was the first, even for Maksu.

When Maksu lightly exerted pressure into the rock, it turned to dust.

At the same time.

The air rushed out, and the space in front of Maksu exploded.

There, Maksu was able to see what he had been searching for.

It was the name of the beauty who was said to live in the palace of the moon.

Maksu had given the flower this name, and had been taking care of it for long.

The Nine Lands Medicinal Flower trembled one of its leaves slightly.

Maksu grabbed onto that leaf, and spoke.

[I have come for you, for I knew you were still alive. It looks like I came at the right time.]

Maksu spoke tiredly as he stroked the body of the flower.

[Now, I must follow the arrogant kid on his journey. That would be the best way to recover my strength. But it worries me to just leave you here.]

The Nine Lands Medicinal Flower stretched out its other leaf and stroked Maksu’s cheeks.

It seemed to be telling him that it was alright, and that he shouldn’t be worried about it.

Maksu, who had been staying silent for a while, spoke.

Maksu looked at the flower with patience.

After a moment, when the flower made a positive movement, Maksu opened his mouth with a gleeful face.

[Thank you for trusting me.]

Maksu carefully put his feet at the ground where the roots of the flower were located.

He then asked a question.

[You will never be able to go back. Are you fine with this?]

The flower once again made a positive movement.

Maksu smiled as he saw this.

[You will accompany me from now on.] When he exerted force, the ground shook like water.

Maksu then breathed in a large amount of air.

He was trying to exert as much godly power as he could.

The giant roots of the flower were exposed and was floating in midair.

[Put your roots down into where my neidan is.]

The roots of the flower flew towards the abdomen of Maksu.

It seemed that Maksu’s body was going to get pierced by the roots, but that was not the case.

The giant roots of the flower got sucked into Maksu’s abdomen.

Soon, Maksu looked down at his abdomen, and smiled.

Most of the flower, save for a single, tiny leaf, had set into the body of Maksu.

His body was extremely tired from using so much energy, but he had to walk.

He would recover fast as long as he was next to Cho Ryu Hyang.

Although he didn’t like the kid, there was no choice.

[Just wait until I recover completely…….]

There would be no need to be so concerned with the pearl that the kid had when that happened.

He’d go up to heaven, then perform his revenge.

He tried to take a step, and swore without even realizing it.

He couldn’t even teleport because he had used too much power.

He’d have to walk the whole distance.

Walking to the branch of the Heavenly Demon Church by feet made Maksu feel very, very sorrowful.

He realized something then.

Didn’t he have some ability other than his strength?

How did he forget about it? 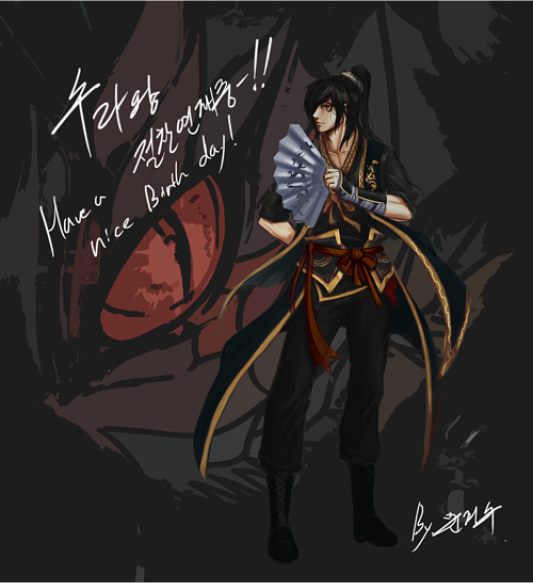